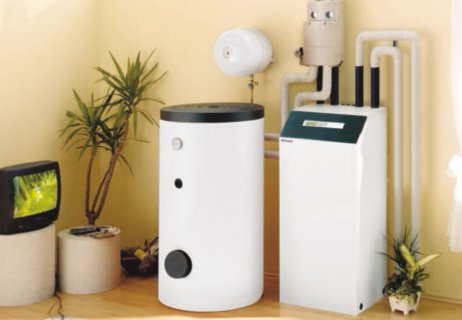 Electric resistance heating is 100% energy efficient in the sense that all the incoming electric energy is converted to heat. However, most electricity is produced from coal, gas, or oil generators that convert only about 30% of the fuel's energy into electricity. Because of electricity generation and transmission losses, electric heat is often more expensive than heat produced in homes or businesses that use combustion appliances, such as natural gas, propane, and oil furnaces.

If electricity is the only choice, heat pumps are preferable in most climates, as they easily cut electricity use by 50% when compared with electric resistance heating. The exception is in dry climates with either hot or mixed (hot and cold) temperatures (these climates are found in the non-coastal, non-mountainous part of California; the southern tip of Nevada; the southwest corner of Utah; southern and western Arizona; southern and eastern New Mexico; the southeast corner of Colorado; and western Texas). For these dry climates, there are so few heating days that the high cost of heating is not economically significant.

Electric resistance heating may also make sense for a home addition if it is not practical to extend the existing heating system to supply heat to the new addition.

Electric furnaces are more expensive to operate than other electric resistance systems because of their duct heat losses and the extra energy required to distribute the heated air throughout your home (which is common for any heating system that uses ducts for distribution). Heated air is delivered throughout the home through supply ducts and returned to the furnace through return ducts. If these ducts run through unheated areas, they lose some of their heat through air leakage as well as heat radiation and convection from the duct's surface.

Blowers (large fans) in electric furnaces move air over a group of three to seven electric resistance coils, called elements, each of which are typically rated at five kilowatts. The furnace's heating elements activate in stages to avoid overloading the home's electrical system. A built-in thermostat called a limit controller prevents overheating. This limit controller may shut the furnace off if the blower fails or if a dirty filter is blocking the airflow.

@PGLocal4 does the addition of a vertical radar beam determine water from hail or debris? What is correalation coefficient...I heard Ben Wed, 24 June 2015 07:03 AM