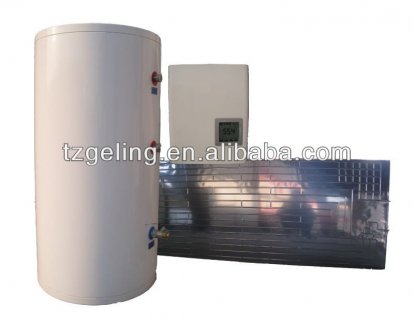 According to the U.S. Department of Energy, roughly 41% of the energy consumed in the U.S. is used the power buildings. Within that number, almost half is used to heat or cool the building. Current technologies allow for consistent thermal management, but most utilize energy harvested from fossil fuels or convert electricity back into thermal energy. Background literature shows that the utilization of alternative heat resources such as heat pumps and solar thermal collectors can greatly reduce the energy used for heat delivery while producing adequate heating performance. A combined hydronic system using a bank of solar thermal collectors in parallel with a heat pump was designed and installed to feed various loads. After commissioning the system, it was run for 17 days during the end of the winter season to ascertain the performance of the solar collectors and the heat pump as heat sources. The heat pump supplied 65% of the thermal energy while the solar thermal collectors provided 35% of the thermal energy. Overall, the system reached a total energy factor of 1.95. The results show that the system performs better than an electric-based or fuel burning system, but improvements can be made through controls optimization and operating the system year-round.

@Spider: Will Labour's new houses have solar? Good question. Under consideration apparently. No point having heat pumps if you can't afford the lecky Sat, 20 June 2015 04:04 AM